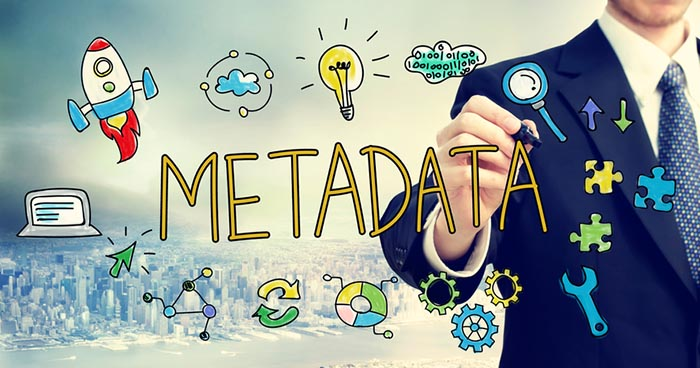 Metadata helps with data management and serves as a descriptor for an object that holds some data or information. In data warehouses, it is collectively organized in a catalog called metadata repository.

The term”metadata” was officially conceived in 1968 by Philip Bagley, in his book, Extension of Programming Language Concepts. Initially, the phrase was mostly used for detailing information about data repositories. With the increase in the need to store large amounts of data, metadata started referring to individual root level objects present in data warehouses.

The information that comes under the umbrella of metadata depends entirely on the requirements of the data warehouse. Generally, metadata is classified into three types:

Each of these types consists of vital elements that are required to describe the data. When the data volume is large and shared among millions of participants,a good practice is to follow some standard procedure regarding these elements.Hence special protocols are designed,known as schemas, which define data elements that will be added in the metadata. One can always create a custom schema for data warehousing, but there is a trade-off between the competence of the user and ideal descriptors of the data (data will be described in a much better way, but the learning curve will be steeper than that of a standard schema).

The metadata schemas have defined syntax that shows the connection between the metadata elements and the level of abstraction of each element. These combined together constitute as different standards followed for the creation of metadata. The use of a certain standard depends on the nature of the data to be described. There are 30+ standards for metadata modeling, but the most common ones for data warehousing are Common Warehouse Metamodel (CWM) and Resource Description Framework (RDF). Both of these models help create metadata for the administration and proper execution of the data warehouse.

OLAP Servers, Data Marts, and ETL Processes are successfully managed with the help of the repository. Since the repository effectively integrates the data warehouse components, it is sufficiently easy to standardize practices. This helps devise strategic policies for organizations that employ data warehousing.

Application of Metadata in Data Warehouses

The creation and existence of metadata certainly put forward the question of its utilization. Metadata is involved during the usage, building, and administration of a data warehouse. It describes constituent entities of the warehouse i.e., Reports, Cubes, Tables, Keys, etc. The metadata also describes the rules and operations, such as transformations and mapping of data. Since it has information about data and all the relevant operations, it enables and improves the use of that data.

A sound metadata syntax and schema can make up for common human mistakes. It helps in automating systems,which means lower chances of error. The existence of metadata secures the data and can almost always guarantee that the user will be able to find, manipulate, safeguard, and reuse data in the future.

Data in warehouses reaches terabyte levels. Metadata serves as a roadmap during the development of a data warehouse, making the process of finding a relevant object considerably easier.Due to its small size, searching data is faster.

Metadata helps utilize large sums of data present in the data warehouse without using the actual dataset. Good metadata will aptly describe the information in a respective container. It gives information about the retrieval, structure, terminology, and regulations governing the data warehouse. Hence, the data can be effectively categorized and utilized.

Since the process of data warehousing results in the accumulation of terabytes of data, it is most fitting to create and discover new relationships and reuse data. The roles and policies defined in the metadata repository enable researchers to reuse data without affecting the security protocols.

Dealing with metadata improves the efficiency of a system, making it robust. Apart from that, controlling the process of data warehousing becomes tremendously easy as business users don’t require expertise in a programming language to utilize metadata for developing and working with the system. All these factors save time and monetary resources both in the initial set up and working of the data warehouse.

Managing the metadata is crucial for successfully operating a data warehouse since it plays a vital role in the correctness of data related processes. One should always generate metadata in a way that is both suitable for the technical jobs involved, and compliments the needs of the business end-users.